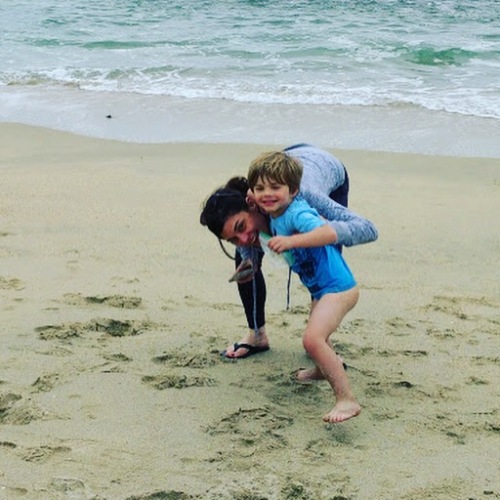 I wasn’t prepared this year for the anniversary of my mom’s death, but then again, I’m not sure I have been any previous year, either. The first year, my son Jamie was born a month later, and keeping him and myself alive took up the bulk of my time. The second, I took a 24-hour break from life to go and write in a hotel by myself, ostensibly working on a never-ending a book about her illness, and while I did manage to sprinkle some ashes off a pier in Santa Cruz (one of her favorite places) I mainly ended up drinking too much wine and getting nothing done. On the third, I was at a total loss, and I don’t remember what I did. Last year, I took Jamie to the Santa Cruz boardwalk, where we had ice cream and watched dozens of barking sea lions lounge in the support beams below us. He giggled and barked back at them, and together, we tossed some of my mom into the wind.

This year, I took the day off and planned to go to the beach with a dear friend and her kids, and my husband was getting off work early and bringing home sushi so our little family could have dinner together, but the day before, I’d gotten bad news writing wise in a way that made me feel like all of these years trying to write have been not only a waste of time, but some kind of cruel joke sent by the universe with a punchline that read, “Ha. You have spent more than 10,000 hours on this shit and guess what? You will still never publish a book.” It is these kinds of moments (and a million others) when I find myself most irritated that my mom isn’t still alive. Then, at 4 am, I woke up with weird, random cramps that had nothing to do with my period and persisted through the early hours of the day and it was most likely raining at the beach and so by 7 am, I was already fucking exhausted and done with the day. Given these factors, I contemplated staying in bed with a hot pad, quitting writing officially, and cueing up at least eight movies for my son to watch while I slept.

Then I considered the last time I was serious about quitting writing and getting back into bed for the day (or perhaps week). It was around the time of my mom’s brain cancer diagnosis, when I lost my first agent and I couldn’t get my work published to save my life and it all felt like a waste and so fucking stupid, and I told her I was done, and she said: “Ok. You can quit writing for now. But you can’t really quit. You are a writer.” And I whined and stomped my feet and then eventually I got over it and kept writing. I’ve been doing some form of this again and again since she died, and these words are in part what keep me going.

The same kind of philosophy propelled me out of bed a few days ago, because I didn’t want to let the deathiversary go by without some gesture of ceremony. I also thought I would be fine, since I hadn’t felt intense grief about her for the last few months; in fact, I thought I might be done with all that. Then I went to the gym to meet my dear friend and burst into tears as soon as I saw her. I did the same thing at the start of the yoga class we were taking and at several points during it. I was wholly unprepared. However, there is no way to prepare for grief.

My friend hugged me and told me I wasn’t alone, and that helped. We decided to go to the beach even if it was raining, and so we loaded up her three kids and my one kid and drove to Half Moon Bay. Because it was supposed to be raining, we left all the towels behind, ditto extra clothes and sand toys. We thought we’d just look at the ocean from the bluffs above, and if we felt fancy, we’d get a cup of coffee at the Ritz up the hill, but then when we got there, it was balmy and almost sunny and our kids were climbing down the steps to the sand and taking off their shoes, and stripping down and dancing in the water.

We were completely unprepared aside from a bag of crackers, a few packets of pureed fruit, some string cheese and a bottle of Prosecco. So we did what you do in these kinds of situations: we sat and toasted my mom and watched my friend’s boys shout and laugh and run in the waves while her little girl hopped around in a pink tutu and my half-naked boy threw rocks into the sea and cackled with joy. Periodically, there would be a skirmish over the one Ritz-distributed plastic pail and shovel (which a kindly Ritz guest had passed on to us at the top of the hill when he saw we had exactly zero provisions) but then it would dissipate and the frolicking would resume. In all, it was a glorious afternoon.

My mother was a person for whom rituals and totems meant a lot, ditto astrology and a belief in reincarnation, and all of these things formed much of the way she made sense of the world. I inherited many of her views, despite many attempts to resist them for a good portion of my life. This is why, every year on the anniversary of her death, I carry some of her ashes around with me for a bit, and then let her go, again and again. While Jamie is only four, I think in some ways he understands this particular ritual, as his memory astounds me at times. When we were getting ready to leave the beach, I pulled out a small Ziploc and told him we needed to sprinkle some of Bobbie Ma into the ocean, like we had done last year with the barking seals. He nodded seriously, and then grabbed a handful of Ma with his chubby toddler fingers, tossing her into the water while shouting a joyful, “We love you Mobbie Ba!” She couldn’t have choreographed it any better.

Of course, I was grateful for so much that day—for deciding to get out of bed, for my kid, my husband, my amazing friends and all the little ways my mom lives on, often times in ways I don’t expect. Like in writing this post, something I haven’t done in a very long time, at least in this rough, less filtered form. I made my own sense of her dying and death by blogging about it, writing from my gut without much time or polish, but still in a way that connected with people. In the years since she died, I’ve been more focused on shaping narratives and structuring chapters than drafting my raw thoughts, having become more than a little obsessed with getting a book out into the world. And perhaps that is the urge I should be listening to when I hear her saying: you can quit, but not really—that the best way to move forward is from the gut, without worrying about form or function or publication. Write, she’s telling me (as she’s always told me) the rest of it can wait.